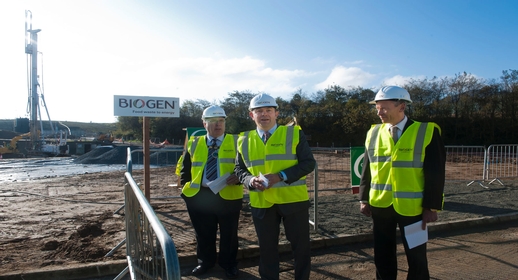 The turf was cut at Gwynedd Council’s Llwyn Isaf site near Caernarfon this week by the Welsh Environment and Sustainable Development Minister, John Griffiths, to mark the beginning of the construction of the 11,000 tonne per year GwyriAD plant.

The anaerobic digestion (AD) plant will be designed, built and operated by Biogen, the UK’s leading food waste AD specialists on behalf of Gwynedd Council. It will process food waste collected from the county’s homes by the Council and from businesses in the region to create renewable energy for the grid and biofertiliser for local farmland. The GwyriAD plant, which is being built next to the former landfill site at Llwyn Isaf, will produce enough electricity to power around 700 houses annually and will play a major part in helping Gwynedd Council significantly reduce the amount of waste sent to landfill.

The £5m Llwyn Isaf plant is on schedule to be completed by the middle of 2013 and is expected to start generating electricity by the end of the summer.

“Prosiect GwyriAD will provide a long-term, sustainable solution for the treatment of food waste in Gwynedd – diverting 11,000 tonnes of food waste from landfill annually and generating enough renewable electricity to power a town of 700 homes similar to the size of Penygroes for a year.

“Our investment in green technologies also delivers long-term economic benefits for the people of Wales. Prosiect GwyriAD will bring local jobs and opportunities to the area – not only during construction, but through permanent employment once the facility begins operating next year.”

John Ibbett – Chairman of Biogen said, “The construction of this plant is the result of a great partnership between The Welsh Government, Gwynedd Council , its residents and the private sector – in this case BIOGEN and the project’s main funders, Iona Capital. It is an exciting model and one which we hope to replicate across the UK.”

Gwynedd Council’s Cabinet Member for the Environment, Councillor Gareth Roberts said, “This is a hugely exciting project. The GwyriAD plant will be the first facility of its kind by a Welsh Council and underlines Gwynedd Council’s commitment to finding new green ways of dealing with the county’s food waste.

“As well as processing more than 200 tonnes of food waste every week in a sustainable and responsible manner, the plant will also produce around 9,000 tonnes of biofertiliser each year which will be used on local farmland and produce green electricity to be sold back to the national grid.”

The plant has been financed by Gwynedd Council, Biogen, Iona Capital and the Welsh Government.