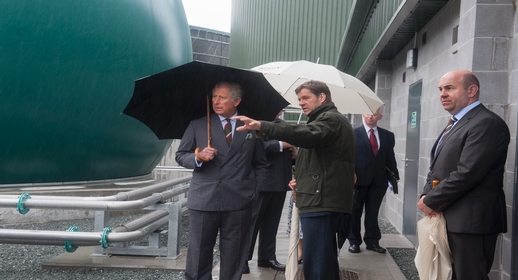 The pouring rain did not dampen the enthusiasm showed by His Royal Highness as he was given a guided tour of the AD facility, which will convert 11,500 tonnes of household food waste into renewable energy every year.

The GwyriAD plant, at Llwyn Isaf near Caernarfon, will prevent thousands of tonnes of food waste from going to landfill. GwyriAD is the first of three plants to be built in Wales by anaerobic digestionspecialists Biogen.

Richard Barker, Chief Executive of Biogen, said he was pleased to welcome His Royal Highness to the new plant. He said: “We are delighted that His Royal Highness took the time to have a personal tour of the plant. “We hope that we demonstrated to him why Biogen is the UK’s leading specialist in anaerobic digestion.”

The GwyriAD plant will generate enough electricity for 700 houses annually, enough to power the nearby community of Penygroes. The plant will play a major part in helping Gwynedd Council significantly reduce the amount of waste sent to landfill.

The £5m Llwyn Isaf plant has been financed by Gwynedd Council, Biogen, Iona Capital and the Welsh Government and will start generating electricity by the end of the summer. The anaerobic digestion process also produces a nutrient-rich biofertiliser, which will be used to help Gwynedd farmland thrive over the coming years.

His Royal Highness concluded his visit by planting an autumn spire rowan tree.