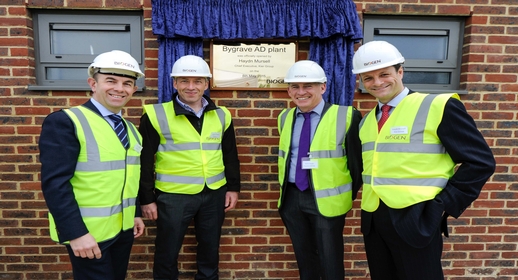 The Bygrave Lodge anaerobic digestion (AD) plant which was designed, built and operated by Biogen,  processes 45,000 tonnes of food waste from household and commercial sources each year to generate renewable energy for the grid and an agricultural fertiliser for use on farmland.

The event was attended by key contributors to the project, representatives from the renewables industry and customers whose food waste is processed at the facility.  Attendees described the facility as ‘fantastic’ and the event as ‘eye-opening’ with regard to the streamlined operations and the knowledge of staff that were on hand to provide guided tours of the plant.

Haydn Mursell, Chief Executive at Kier Group said, “I am delighted to officially open Bygrave Lodge, the fifth AD plant in Biogen’s programme of development and the third built since we went into joint venture with Bedfordia Group in 2012. With the energy crisis ever-present, and the need to reduce our reliance on fossil fuels intensifying all the time, there is an exciting future for Biogen.  AD technology is recognised more and more as an alternative way of producing green energy, and the vital contribution that AD facilities like Bygrave Lodge make to supplying the national grid is only going to increase.”

Julian O’Neill Chief Executive at Biogen, said, “The project has been a huge success, delivered on time and to budget and most importantly, safely.  I am especially pleased that we commissioned the site within three months to achieve full operating throughput before the start of 2015. This once again demonstrates the capability of our design, projects and operations teams along with the outstanding support we have had from our suppliers, partners and customers.”

Bygrave Lodge can produce 2.1Mw of green electricity, enough to power the nearby town of Baldock continually for an entire year.