Biogen celebrates a decade in the food waste business 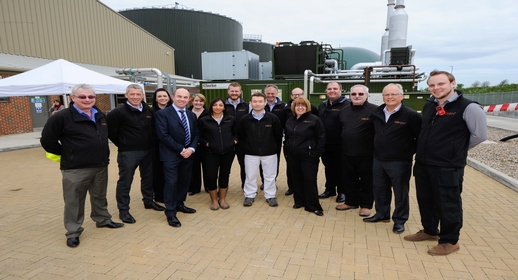 Over the past ten years, Biogen has blazed a trail, leading the way for other AD operators to follow in designing, building and successfully operating commercial scale AD plants which recycle food waste to generate renewable energy for the grid and a valuable biofertiliser for farmland.

Around 180,000 tonnes of food waste from supermarkets, restaurants, manufacturers and households is currently processed annually across Biogen’s five existing plants; with two further plants due to come on stream this summer, that figure will increase to a staggering quarter of a million tonnes each year, generating a combined total of 11MW.

Biogen was established as a food waste management company in 2005 with investment from founders Bedfordia Group and only 3 employees.  The company’s first AD plant in Bedfordshire was completed in 2006, recycling food waste along with animal slurry from Bedfordia’s farming business.

To date Biogen has secured a total of £70m investment, including £24.4m from Kier Group in 2012, making them equal joint venture partners with Bedfordia Group.  Today Biogen operates pure food waste AD plants, has recycled 670,000 tonnes of food waste since operations began and employs close to 100 people across 9 sites in England and Wales.

John Ibbett, Chairman of Biogen and Bedfordia Group said, “I feel immensely proud of what has been accomplished over the past ten years; I knew from early on that Biogen had the potential to achieve great things and it’s been fantastic to see the vision from so many years ago, come to fruition in a very real and meaningful way.”

Julian O’Neill, CEO Biogen said, “Biogen has proven that despite operating in a new and often challenging industry, it is possible to succeed when you have the right combination of great people, exceptional skills and proven technology.  I’m extremely proud of the contribution Biogen has made to the AD industry and look forward to what the next decade holds for Biogen.”

Pictured are some of the Biogen team  (including Julian O'Neill, CEO second from left and John Ibbett, Chairman third from left)  at the company's official opening of its Hertfordshire AD plant in May.