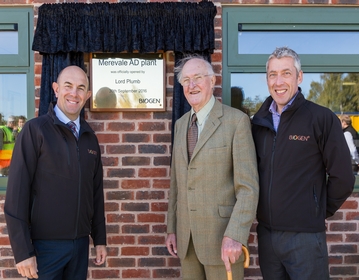 The country’s leading provider of renewable electricity from Anaerobic Digestion (AD) has officially opened its seventh food waste recycling plant near Atherstone in Warwickshire.  Biogen’s Merevale plant processes  45,000 tonnes of waste food from household and commercial sources each year from which it generates 2MW of green electricity for the national grid. Biogen’s network of seven AD plants together recycle a quarter of a million tonnes of food waste every year, producing 11 MW of electricity for the grid (enough to power the town of Harrogate) and a valuable liquid fertiliser for farmland.  This makes the company the most prolific in the UK for diverting food waste from landfill and for generating  green electricity from AD.

The honours were performed by Lord Henry Plumb, former President of both the European Parliament and the National Farmers Union.  He said, “I was delighted to be invited to open the Biogen Plant which obviously is showing a clear success story.   It’s fascinating to look back and think that six hundred men were digging coal from under the site of the plant where eight men are now producing energy from the products of waste which would otherwise have been going into landfill.”

Biogen Chairman, John Ibbett said, “The unveiling of Merevale, our 7th AD plant, is a significant milestone in our ten year history.  Biogen has been at the forefront of the food waste AD sector since its inception and continues to be regarded as one of, if not the lead player in the market.  I am so grateful to the team of people who have made it all possible and it is a real credit to everyone who has been involved along the way.”

Nigel Sheppard, Projects and Commercial Director for Biogen, said: “The site at Merevale provided specific challenges associated with the ground conditions. To overcome this required a number of engineering solutions to be explored. Roltons worked collaboratively with both Biogen and their civils contractor Toureen to develop and design the most cost effective solution. This collaborative working by the team saw the plant built and commissioned in under a year.”

Andrew Chisem, Director for Rolton Group, said: “It’s always great to see a project reach completion and it was such a pleasure to see the Merevale food waste AD plant declared officially open.  Rolton Group has been working with Biogen on various projects since 2007 and our engineering teams thoroughly enjoyed using their expertise to help create this state-of-the-art AD plant. We’re delighted to have been a part of such an innovative project which will generate truly sustainable, low carbon energy – enough energy to power thousands of homes per year.”

As part of the ceremony, certificates were presented to the company by CEEQUAL (the evidence-based sustainability assessment, rating and awards scheme for civil engineering) for both the Merevale site and Biogen’s Bygrave plant near Baldock in Hertfordshire.  They were awarded in recognition for the way the design and build of the two plants has  improved sustainability in civil engineering, infrastructure, landscaping and the public realm.

Among the many certificates and awards Biogen has received, one of the most highly sought after in the industry is the PAS 110 certification which is held by all seven plants including Merevale.  Awarded by the Biofertiliser Certification Scheme, the certification provides assurance to consumers, farmers, food producers and retailers that the digestate produced from AD is safe and fit for spreading to farmland as a replacement for chemical fertilisers.