On 16th August 2016 Biogen CEO Julian O’Neill was interviewed by The Huffington Post journalists Paul Josephson and Alex Kushneir on how Biogen is striving to help solve the UK’s food waste issues. 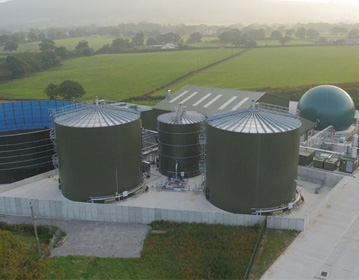 The video, produced by Sequel Group in 2015, created a visual narrative that communicates with all Biogen stakeholders the importance of food waste recycling and sustainable energy sources, and uses motion graphics and simple animation to both inform and inspire. Following enormous success, the video, ‘Food waste to renewable energy, everything taken care of’, won Gold at the EVCOM brand communications awards in London last year.

The research team at The Huffington Post contacted Biogen in relation to their own series of videos on innovative businesses tackling the world’s toughest problems. Previous videos in the series have garnered huge interest from industry stakeholders, with some videos reaching highs of around 60 million views on Facebook alone.

In addition to Biogen’s award-winning video being featured within The Huffington Post’s series, journalists requested an interview with Biogen CEO Julian O’Neill which would form part of their feature on food waste recycling.

This interview took place via a Google Hangout live video session between Julian O’Neill and Huff Post  journalists Paul Josephson and Alex Kushneir. The cross-Atlantic conversation covered topics such as the need for food waste recycling, the practical requirements for a successful plant, and how Biogen is working with a wide range of organisations to help solve their food waste issues.

Talking of the sustainable idea behind the uptake of anaerobic digestion cycle Julian O’Neill commented, “the move to renewables is about using our resources on the planet and trying to mitigate the carbon impact we have on the earth”. Biogen currently recycles 250,000 tons of food a year, which generates enough electricity to power 25,000 homes.