A charity climb of Snowdon undertaken by green energy firm Biogen has raised a staggering £10,380 for local groups in Gwynedd. 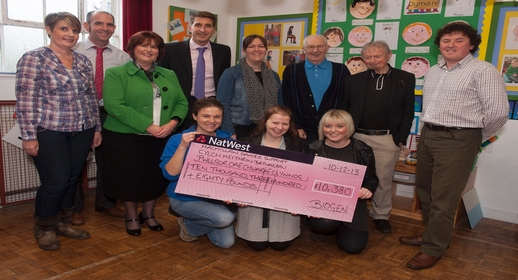 Anaerobic digestion specialist Biogen, which is responsible for the food waste recycling plant at Llwyn Isaf, took part in a combined cycle ride and mountain trek.

A 39-strong team raised much needed funds for the nursery and playing fields in Clynnog Fawr nursery, as well as Macmillan Cancer Support North Wales.

Richard Barker, CEO, Biogen said, “We set out to raise £5,000 and so the fact that we have doubled that figure is testimony to the fantastic support from our sponsors and the commitment of the team who took part.

“The cycle and climb challenge was a huge undertaking both logistically and practically. For some of the team, it was the first time they’d undertaken anything on this scale. However, knowing that so many had taken the time to make a donation helped to spur us on.”

The money raised means that Clynnog Fawr Nursery, which is situated near the anaerobic digestion plant, will be able to remain open despite having its funding cut. It also means thatClynnog Fawr Playing Field Committee will now be able to maintain the playing field, repair broken fences and damaged outdoor play equipment. Macmillan Cancer Support (North Wales) will have more funds available to help them provide practical, medical and financial support for cancer sufferers and their families.